Invisible Children, the organization that I worked for while in Uganda last year, has had a LOT going on over the past few months. Most importantly, Obama has agreed to send 100 US troops to the Congo to find Joseph Kony, the leader of the Lords Resistance Army (LRA). I will be posting updates on this over the next few weeks.

Another revolutionary project that Invisible Children has underway is the Protection Plan, a five-step plan that will end the war permanently. Part of this plan, the Early Warning Radio Network, sends FM radio broadcasts and community-based defection fliers sending “Come Home” messages directly to LRA members who were abducted from their villages and forced to fight. These messages will inform the LRA how to safely defect and return home.

These are the details that we know so far: (from Invisiblechildren.com)

-The youngest child was 7 months old and the oldest was 5 years old.

-On November 2nd, 13 people were released from the LRA near Bangadi, DRC.

-The women were from multiple backgrounds – Ugandan, South Sudanese, and Congolese.

-Several of the women had been abducted over ten years ago.

The Early Warning Radio Network broke the news for these defections. These reports served as a support to help mobilize NGOs which  facilitate the return process for returnees. 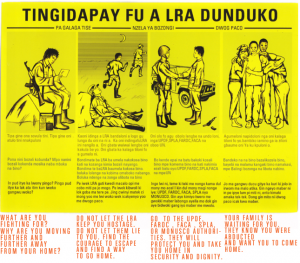